Trees by the road- sold 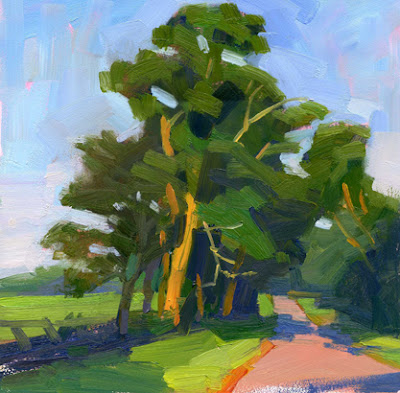 Oil on panel, 6" x 6"
Painted these trees as the sun was rising yesterday morning. I should probably tone down my color when painting roads. I always seem to see them as being very orange.
Posted by Kathy Weber at 6:13 AM 10 comments:

My plein air set up 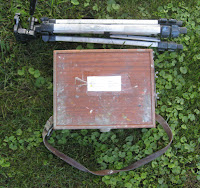 I was asked about the pochade box I use so decided to do this post. I have three different portable easels that I've bought over the years. The first was a full box Julian French easel. Well built but heavy. I still use it, but mostly as a second easel indoors.

This is my second one, a pochade box by Open Box M. I bought the lightweight tripod from a friend who bought a bunch of them off Ebay a long time ago. It cost me $15.00. It has a quick release mount so it sets up in seconds. 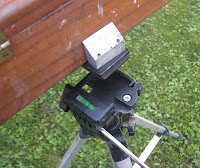 On the lid is a list I made for myself of things to remember to bring. It reads:" Paint, Turp, Brushes, Rags, Panels or canvas, Hat, Easel, Suntan lotion, Bug spray, Water, food". I try to remember to actually read this before I leave the house. Recently I almost walked out without my brushes. This box was expensive, but it's gotten a lot of use and held up well.

Here it is actually set up. It has a spring mounted clip that will hold a 10" wide panel or canvas. There is actually a little storage space behind the panel which I never use.

The first palette bit the dust so I made another. It's a bit smaller than the original, which fit so snugly that in humid weather I had a hard time getting it out of the box because it would swell. I tape wax paper to the palette before I lay out my paints so it makes clean up a lot easier. Wax paper is somewhat porous, so some paint residue does get through. 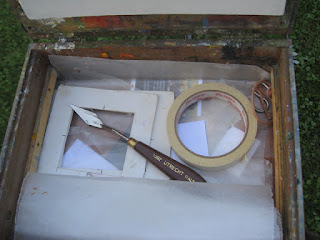 There is storage space under the palette. In this I put extra pieces of wax paper, a palette knife, tape, business cards, and a couple of viewfinders which I made and find very useful. One is square, the other more rectangular. There is an S hook fastened to a string taped to the bottom of the box. This fits in the corner of the box when it's open and I hang my turp container from it. The string prevents it from falling off and getting lost. 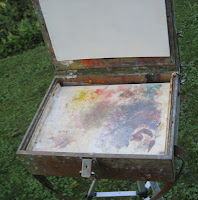 I carry paint, brushes, turp, rags or paper towels in a backpack. Often I also use a small tote bag to carry an extra panel or two, food, water, hat, etc. All together, it's pretty light weight and portable and still my favorite set up for outdoors.

Recently I bought a Coulter Plein Air System so that I could paint larger pieces outdoors but have to admit I haven't used it much. 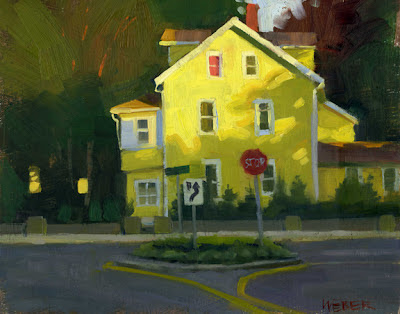 Oil on panel, 8" x 10"
I was painting on the bike path one evening and had packed up to go home. I was stopped dead in my tracks by the sight of this house. I looked at it for a few seconds and thought, should I or shouldn't I, because I knew the light would only last a couple of minutes. I decided to go for it, dropped my backpack on the ground, set up my painting gear (love that quick release tripod and pochade box), took a quick photo for reference, and practically threw paint at the panel.

I ended up reworking the house somewhat from the photo, mostly to correct architectural details. I'm pretty happy with it, maybe I'll try a larger version.
Posted by Kathy Weber at 1:37 PM 9 comments: 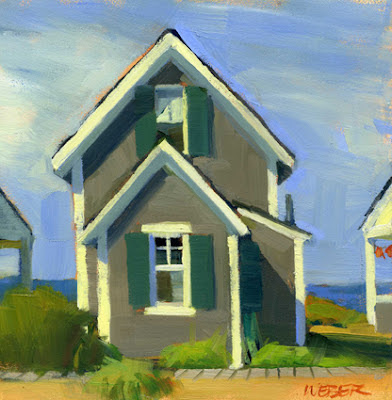 Oil on panel, 6" x 6"
While on Cape Cod for a few days I painted these little cottages at the top of Corn Hill (another place you want to get permission before you paint). One of the few places on the Cape where you're up high and have a wonderful view.

Hazy morning on the river 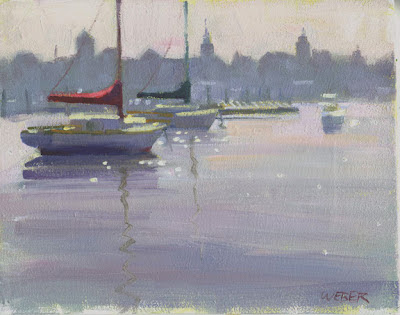 Oil on panel, 8" x 10"
Saturday morning Mike and I painted in Barrington along the river. Very hot and hazy. The color in the original is a little pinker and softer than this.

On another note- if you're in the Providence area and are interested in a 3 hour painting session with a clothed (more or less) model, a new class (no instruction) is being offered by the Pawtucket Arts Council starting Tuesday, August 21 from 7-10 PM at the Mill Gallery, 560 Mineral Spring Ave., Pawtucket. Cost is $10.00. Bring your own easel, no odor turp, dropcloth if you're messy because it will be held in the art gallery. Questions- call Ann 401-241-7725.
Posted by Kathy Weber at 9:10 AM 6 comments: 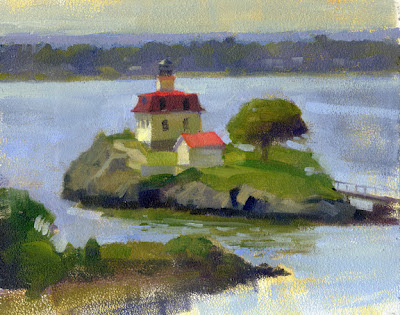 Oil on panel, 8" x 10"
Painter Mike Rooney stopped in East Providence on his way to Cape Cod this weekend and I had fun showing him how beautiful the East Bay area of Rhode Island is. We painted this view of Pomham Rocks lighthouse from the grounds of a condominium complex. If you want to paint there, be sure to get permission from the board of directors first ( :
Posted by Kathy Weber at 12:00 PM 2 comments: 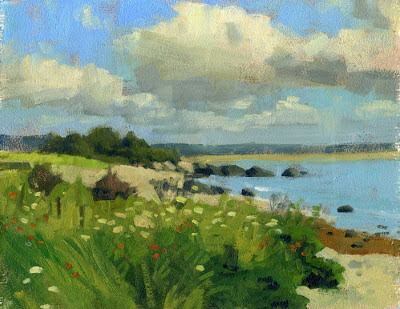 Oil on panel, 8" x 10"
Another study from Allen's Pond. This is painted on a scrap of board with uneven edges so the price is lower than usual for my 8x10's. 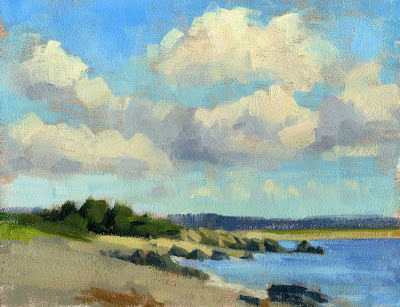 We went back to the Allen's Pond Audubon Preserve this week. I really love that place- so serene, so few people around. I've been trying to figure out how to paint clouds, so I did this study. They change so fast. My latest theory- design/ place the clouds, then work them from the inside out, work the sky blue from the outside in, keep the edges soft and loose for as long as possible. Oh, and remember that they aren't white. They're pale yellow, or peach, or something...
Posted by Kathy Weber at 6:48 AM 5 comments: