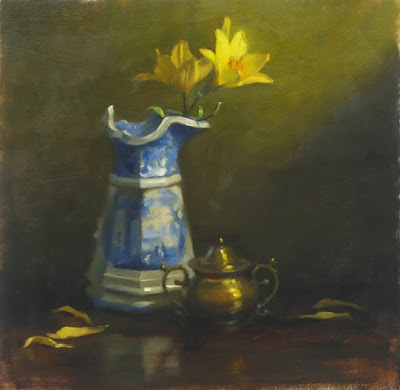 Oil, 20" x 20"
This broken handle pitcher was another trash heap find. I was excited to paint it because its size, shape and color made it a good anchor for a still life.

I decided I wanted to have a lot of air around it, rather than trying to fill up the space the way I normally would. It's more about the light than the objects.

I painted this in two passes- hard to do when you're painting lilies, which don't last long. I got everything blocked in, and then painted the lilies in as much detail as I could. I had to do something else the next day, so two days later I got back to it. It was dry to the touch, so I oiled it out (I use stand oil cut 50% with OMS), then repainted just about everything, except for the lilies, to which I just added some brighter, lighter yellow, and a bit of glow in the background. 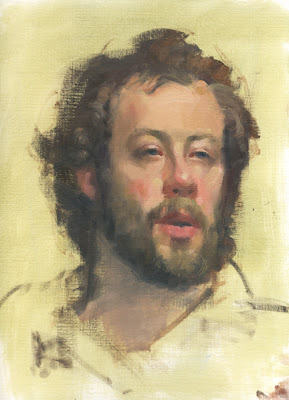 Oil, 12" x 9"
All I've wanted to do lately is paint portraits. This model's head kept tipping further and further to the right every time he got up to pose, until it was almost at a 45 degree angle.

I'm loving teaching my "Limited Color  Portrait" class at the South County Art Assoc. in Kingston, RI. It's a full class and they're working really hard. Fortunately, the association sprang for a air conditioner this year, so it's much more comfortable than it was last summer!
Posted by Kathy Weber at 8:14 AM No comments: 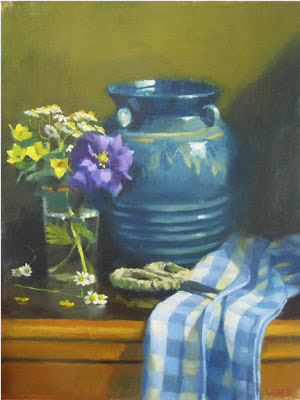 Oil, 16" x 12"
I've been anxious to get back to painting some still lifes for a change, especially since my studio mate found this beautiful ceramic vase that someone in our building was throwing away. The tabletop that it's sitting on was also being discarded.  Ann and I both saw it at different times, she decided not to clutter her space with one more piece of junky furniture, but I had no such willpower. Besides, it's the perfect height for a still life.
Email me for price.
Posted by Kathy Weber at 4:44 PM 3 comments: