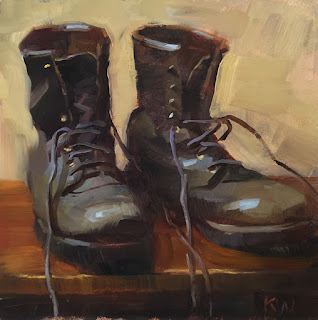 Oil on panel, 6" x 6"
I lost interest in painting for a good part of the last year, but have been getting back into it lately. When I heard about a master class that George Nick was offering, I decided to sign up for it, because so much of what I have been painting just felt so uninspired.

The first assignment was a 16 x 20 still life in no more than 6 shades of black and white. So I decided to paint my husband's hiking boots.

The thing about using such a limited value scheme is that it forces you to simplify and, in the process, to eliminate edges and other unimportant details. I'd never painted such a big value study before, and I found it liberating. I would recommend it as an exercise to anyone. It forced me to simplify the shadow areas and let them blend into the background. 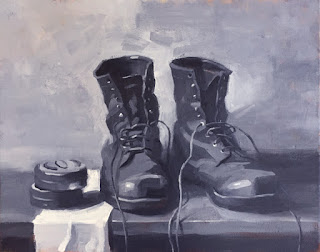 The photo heightened the contrast in the background of this painting, in reality it's a little flatter and less brushy looking.
After I painted the big black and white, I painted the 6x6 in color, letting any detail in the shadows remain indistinct, and detailing only the light areas.

Oscar and the Artist Co-op 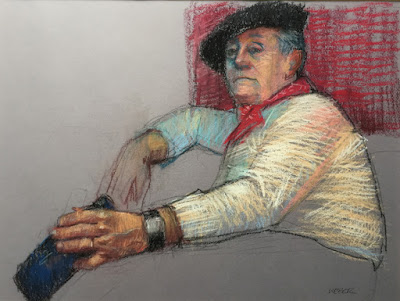 "Oscar"
These portraits were actually done quite a while ago but they remain among my favorites. I just reframed them and they are now on display at the artist co-op that I joined about a year ago in Warren, RI. It's called Made in Warren and I'm really enjoying being a member. A great group of people and a lovely storefront on Main St. in Warren. 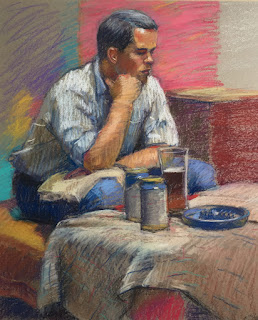 "Beer for Breakfast"- this was to be a 3 week pose. I did the pastel as a study for an oil painting. The next week he showed up with a shaved head! Just not the same. The painting didn't survive. And no one was having beer for breakfast; it was just the name that popped into my head.
Posted by Kathy Weber at 2:22 PM 2 comments: