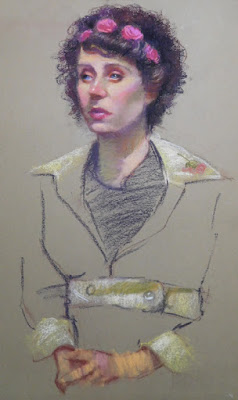 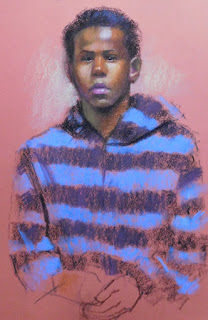 A couple of recent ones, pastel on 1/2 sheets of Canson paper. Getting models to put their hands back in the same position each time- not so easy.
Posted by Kathy Weber at 1:50 PM No comments: 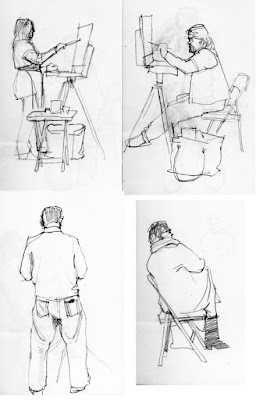 The Cape Cod Museum of Art is hosting a show titled "Life Studies: Figurative Artists at the Schulenberg Studio" now until Jan. 10. Yesterday they recreated, in a gallery in the museum, the figure painting group that meets regularly in artist Paul Schulenberg's studio in Eastham, MA. Above are some sketches I did while they were painting the model. Below are some photos of the group in action.There were about 20 artists painting. 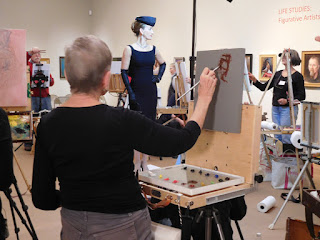 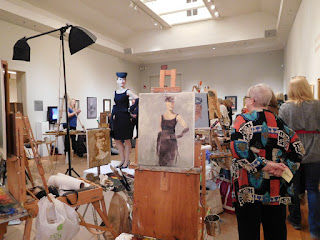 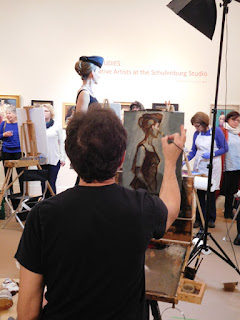 Posted by Kathy Weber at 9:18 AM No comments: 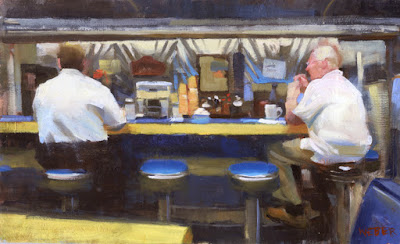 Oil on panel, approx. 6" x 10"
I did this painting from sketches and a photo taken last spring.You can see the original post here:

It's that time of year again- when Ed and I get together at 6AM to sketch, it's dark and cold, so we have to find  someplace with heat and coffee.
Posted by Kathy Weber at 7:46 AM No comments: 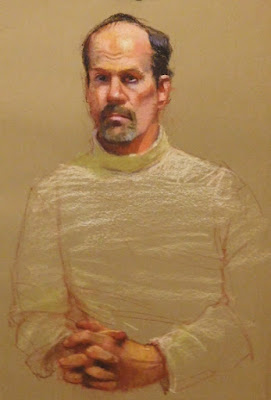 Last night's model was Jeff, and I went back to using pastels, on Canson paper.
Posted by Kathy Weber at 6:33 AM 2 comments: 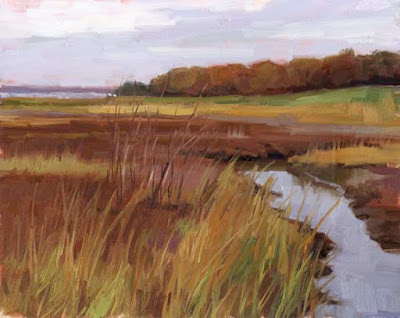 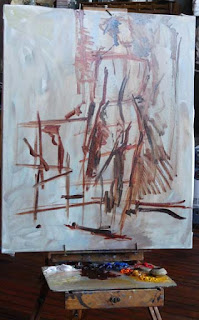 I've been admiring Ben Fenske's work for a while and had the opportunity to see him do a demo yesterday. He painted from a live model with about 25 people in attendance at a studio in Waltham, MA. 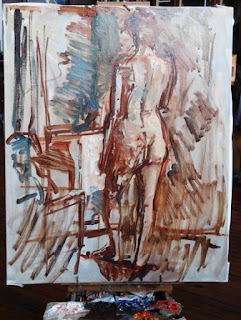 Ben sat while he painted and started off with a special paintbrush- two paintbrushes taped together to  make a longer handle so he could get a little more distance between himself and the canvas. I'm going to try that! He used Utrecht bristle brushes, mostly sizes 4, 5, and 6, long filberts and flats. Unlike me, he doesn't keep a container of mineral spirits to swish his brushes around in. Instead, he holds 8-10 brushes and uses a different brush for each color. All he had was a little container for his medium, which was linseed oil and turp. 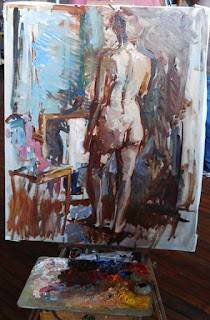 He painted on Claessen's pre-primed linen. He had washed some color onto the surface of the canvas before he started. His favorite surface, he said, is an old painting, because he likes the unexpected colors and texture that he gets that way. He doesn't do that for demos because it would be too difficult for people watching to see what he's painting. He spent a lot of time trying to get an accurate drawing to start with, carefully measuring and comparing. 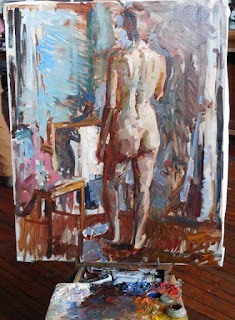 This is the painting after two and a half hours (including breaks). The last thing he did was to put in the warm red on the shadow side of the model, which really started to bring it to life. He will often put aside a painting for a few weeks so that he can look at it with fresh eyes to continue work on it.
Posted by Kathy Weber at 8:08 AM No comments: